June 29, 2022 By Tacoma/Pierce County Habitat for Humanity in Aging in Place Home Repair, Building on Faith 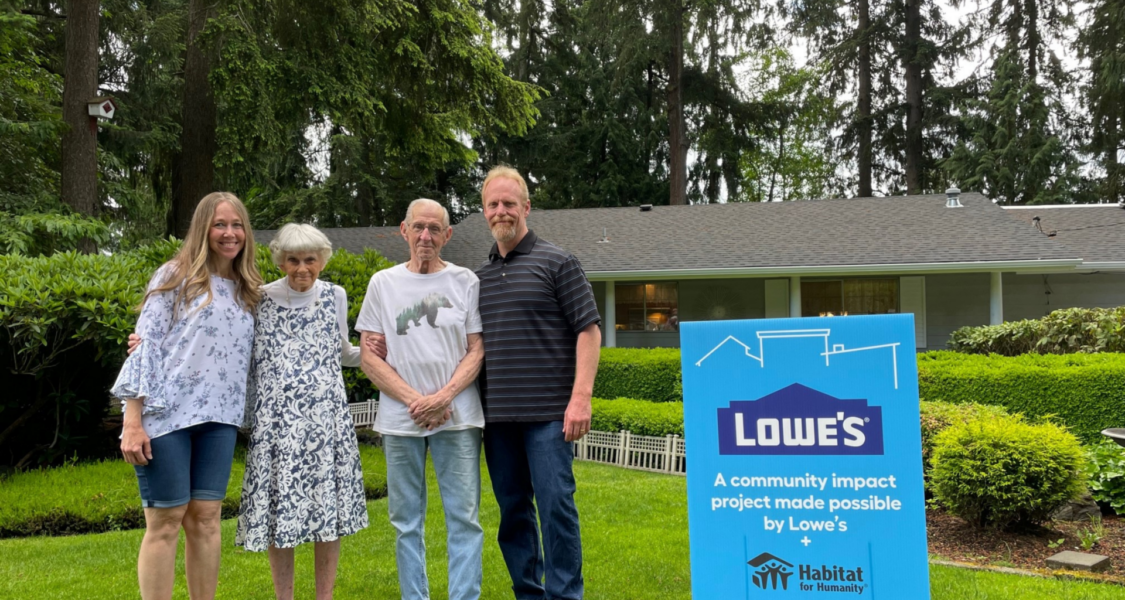 At its foundation, Habitat for Humanity has always been about neighbors helping neighbors. That’s exactly what happened a year ago, when Puyallup residents Brett and Kerry were approached by one neighbor about another – a couple in their 90s who desperately needed a new roof.

Fred and Patsy’s roof had been in disrepair for a while. Two years ago, they hired contractors to do the work and paid upfront, but the contractors never showed up. Fred tried to get on the roof himself, but found he wasn’t as surefooted as he once was. Caring for their 67-year-old daughter with health issues had drained their savings. Fred and Patsy were out of options.

“So we began a conversation about how we might help,” said Brett.

It was Brett’s wife Kerry who put the ball in motion, reaching out to Tacoma Habitat after learning about the Aging in Place (AIP) Critical Home Repair program. The AIP team assessed Fred and Patsy’s roof, but hesitated to take it on because of how costly it would be. But Brett, who is lead pastor of Soza Church in Puyallup, felt confident his church could rally to raise the difference.

Brett said that after getting to know Fred and Patsy, he felt called to help them – partly because of how much Fred and Patsy have helped others.

“They have a long history of helping people,” says Brett. He went on to share that during WWII, when Patsy was a child, her family fed Japanese Americans interned at the Washington State Fair through the fence.

Patsy (91) and Fred (90) have been married for 72 years. Fred is a Marine Corps veteran who served in the Korean War, after which he had a 39-year career with chemical corporation, Pennwalt. Fred and Patsy have lived in their Puyallup home for 46 years. They shared that many of their neighbors had been there for decades as well. “Our children grew up together, we vacationed together,” shares Patsy. “But now we’re the last ones left.”

By spring, Brett’s church had raised more than their goal amount. Between those funds, and a home repair grant that Habitat received from Lowe’s, they were able to leverage the additional funding needed to cover the large project. Fred and Patsy finally received the roof they long needed.

“I love the community aspect,” says Kerry of the project. “I think God designed us to be in community.”

Fred joked that he wants to adopt Brett and Kerry, to which Brett answered, “You are already our family.”

Fred’s praise extended to everyone who helped with the project. “The world is all bad, bad, bad. Then you meet kind people and you know it’s alright. We owe everything to these guys. It is only through the Lord that we got this done.”