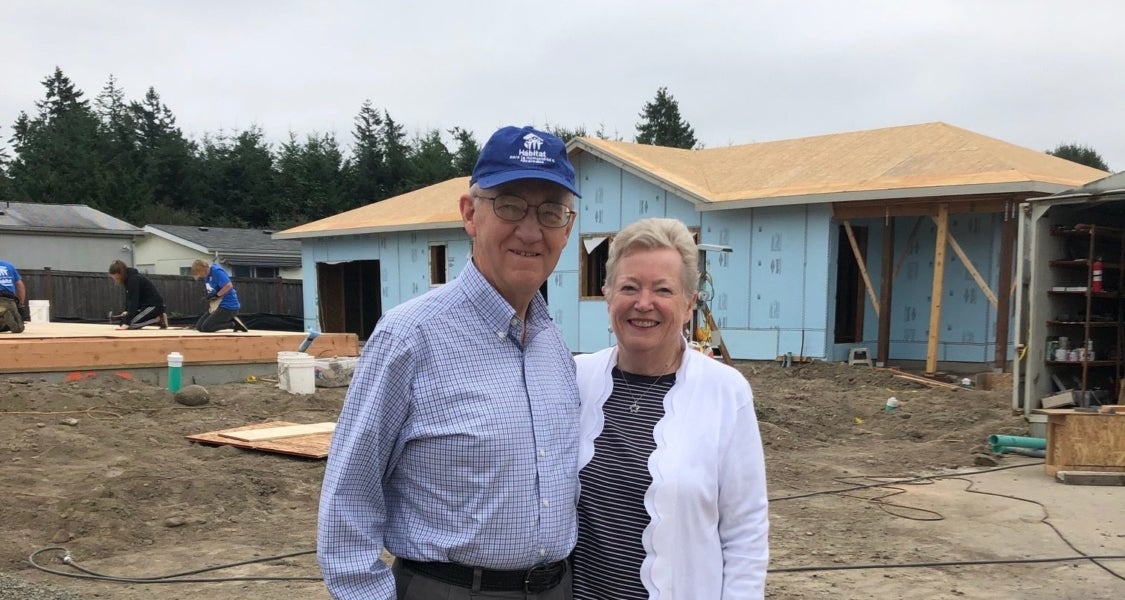 Karen and Howard are Habitat volunteers who recently celebrated their 50th wedding anniversary. The couple moved to Tacoma from Atlanta in 1974.

Karen’s journey with Habitat began in the 1980s when she was on the family selection committee during the early days of the Tacoma affiliate.

Then she got involved with Global Village.

Karen jokes, “We are spending all of our children’s inheritance on Global Village builds.”

“It’s interesting to see how they do construction in other countries versus here,” says Howard, who used to own Seattle-based Metsker Maps. After selling his business in the 1990s, Howard did odd jobs working at H&R block and picking up divots at a golf course before becoming an infrastructure cost estimator with FEMA.

Karen, who has spent her career as a teacher, is finally ready to retire from substituting now that she is almost 74. “I still love kids and I love teaching. I just don’t want to get up at 5am anymore.”

Karen and Howard have volunteered locally at Tacoma/Pierce County Habitat for Humanity’s The Woods at Golden Given neighborhood and before that, Ainsworth Vista, but their involvement these days is mostly bringing snacks out to construction sites. “It gives us a chance to see what’s going on in different parts of the city,” says Karen.

For their 50th anniversary, the couple asked for donations to Habitat in lieu of gifts.

“Habitat for Humanity is a well-run, loving organization,” says Karen. “It’s such a positive ethical organization and so focused on doing the best for families.”