July 15, 2019 By Tacoma/Pierce County Habitat for Humanity in Habitat Homeowners 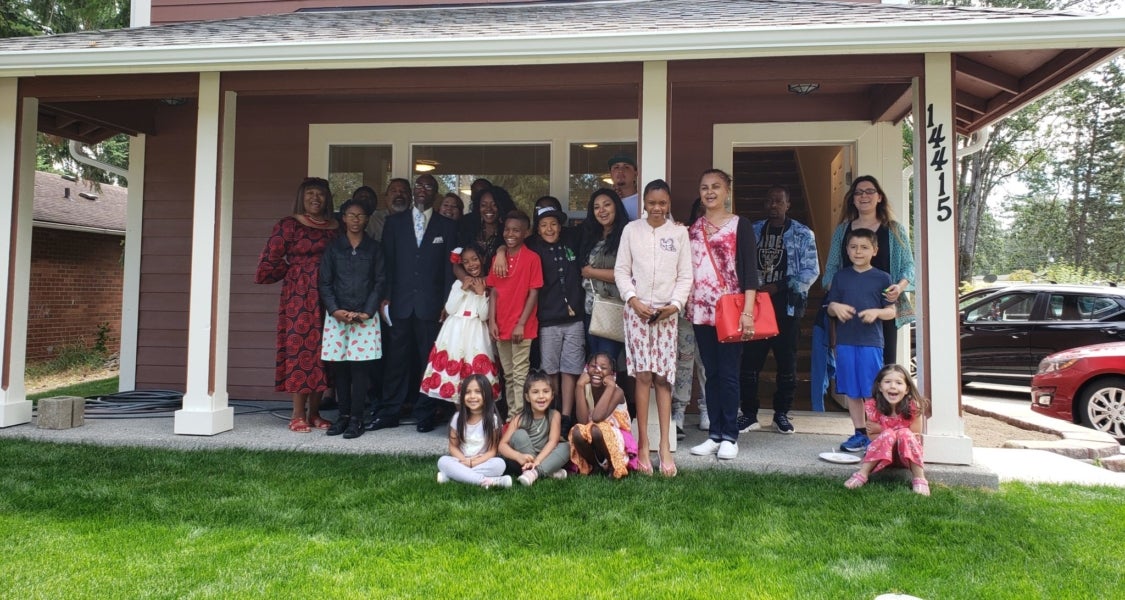 Eleven-year-old Jusiah and six-year-old Ariella knew their mom spent most Saturdays helping Habitat for Humanity build homes, but until they walked into their own home dedication in late June, they had no idea that one of the homes she had been helping to build was theirs.

“They knew I was looking at homes, but I told them I was helping other people,” says Shaneka.

The family’s journey to homeownership started a little over a year ago when Shaneka’s best friend told her about Habitat. Shaneka and her children lived in a Puyallup duplex. The owner approached her about buying it, but it had only two bedrooms. “My son hates sharing a room with his little sister,” says Shaneka.

Over the last year, Shaneka has shared Habitat for Humanity’s mission with her children and explained how Habitat helps families purchase a home. When the children asked if they could get a home with Habitat, Shaneka said, “Let’s pray over it.”

Earlier this year, Shaneka was matched with a home and she began planning how to surprise the kids. “I drove them by the house,” she says. “I pointed it out and said, ‘That looks like a nice house, doesn’t it?’”

She even started packing, telling the children, “I know God is going to bless us with a house, so we better start getting ready to move!”

Pulling off the surprise meant enlisting the help of grandmas, aunts, and uncles. The kids arrived dressed to the nines, to a house full of family, friends and supporters from the Habitat community. When the door opened, everyone hollered “SURPRISE!” and at last Shaneka revealed that this house was their new home.

Jusiah looked around, stunned, “What? … Oh my gosh” and fell into his mom’s arms. The look on his face was priceless.

The kids were eager to explore the house – and see their very own rooms.

Following the dedication ceremony, Ariella was twirling in her party dress in the living room singing “This is my brand new, really big house.”

Now that the surprise is over, Shaneka says she is most looking forward to having somewhere she can just be; where she doesn’t have to worry about rent continuing to increase. “It’s so nice to know it’s ours!”