October 16, 2022 By Tacoma/Pierce County Habitat for Humanity in Advocacy, Announcement 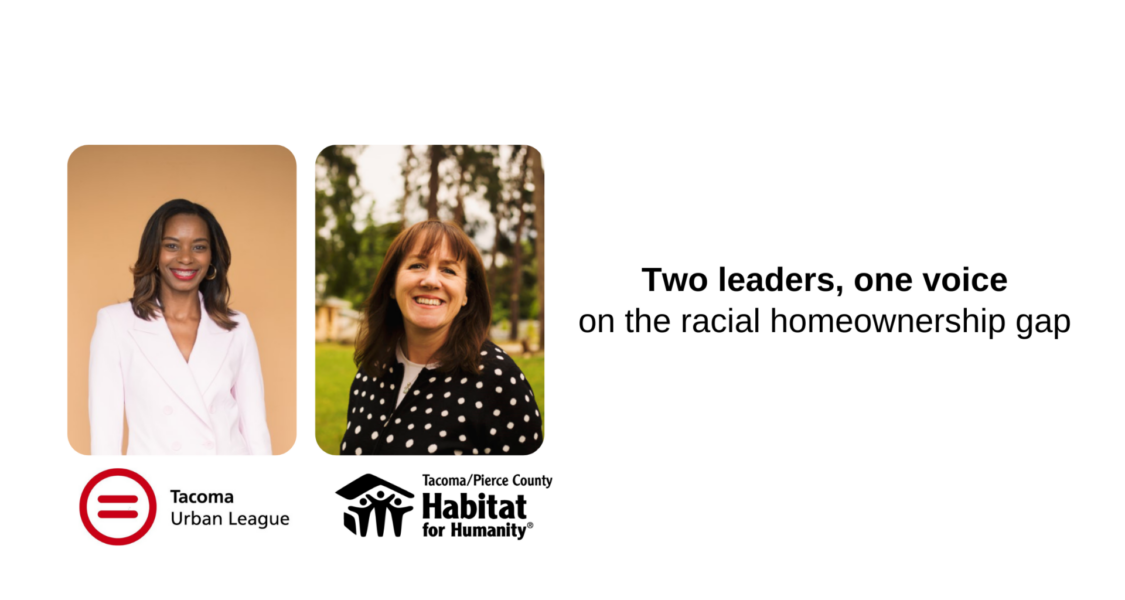 Not surprisingly, Washington State says the housing gap for people of color is more significant today than when housing discrimination and redlining were legal in the 1960s. Rather than celebrate these “revelations,” we contend it’s high time to take action, with investments as sizable as the problem.

We know all too well the systemic roadblocks people of color, and particularly Black Americans, face in realizing the dream of homeownership. Through our respective organizations, we work at the ground level with everyday people who struggle to carve out opportunity and afford the basic human right of safe and decent housing against the landscape of systems designed to prevent their financial mobility. Which is why—even before the Housing Disparity Workgroup’s study was released—we were working on an organizational partnership with the goal of increasing Black homeownership rates in Pierce County.

The culturally anchored Pathways to Homeownership program will work at the intersection of Tacoma Urban League’s Black Empowerment Center and Tacoma/Pierce County Habitat for Humanity’s affordable housing solutions. This partnership is grounded in strengthening the economic capacity of the Black community by creating both access and opportunity to achieve and sustain successful homeownership through workshops and one-on-one coaching by HUD-approved housing counselors.

In early 2022 Harvard University’s State of the Nation’s Housing Report stated the national homeownership rates of Black households stood at just 45.3 percent— some 28 percentage points below the rate for white households. In Tacoma, things are much more dire: just 33 percent of Black Tacomans own a home.

While Tacoma has become one of the most racially diverse cities in Washington, Black households experienced a stark trend of decreased homeownership between 1990 and 2020, according to the City of Tacoma’s Analysis of Systemic Disparities in Achievable Housing Options 2021 report. Though prospective Black home buyers make up only 6% of mortgage applicants, they make up nearly 10% of all denied applications.

To be sure, the housing gap is about so much more than shelter. Structural racism has prevented the Black community from buying homes, which has continually fed a severe and still growing racial wealth gap between Black and white households. The average white household’s net worth is ten times that of a Black family.

Homeownership can be a springboard to asset building, financial equity, social stability and positive health outcomes. According to the Federal Reserve, the net worth of a homeowner is 40x greater than that of a renter. Simply put, owning a home provides the capability and opportunity of creating generational wealth.

Director of Princeton’s Program for Research on Inequality, Ellora Derenoncourt, published papers in May revealing that progress in closing the Black-white wealth gap has not only stalled since the 1950s, but continues to grow. For every dollar the average white American has today, the average Black American has just 17 cents. In 2016, Prosperity Now and the Institute for Policy Studies, estimated it would take 228 years for Black wealth to catch up to the level of white wealth at the time. Just three years later, another study from the Federal Reserve Bank of Cleveland increased that figure to 259 years.

It’s more than time for money to flow into righting these wrongs.

With serious investment from all levels of government, we can begin to root out the legacy of structural racism in homeownership and turn the tide of housing equity, which in turn will begin to right the racial wealth gap.

On the non-profit front, we are doing our part. Our Pathways to Homeownership program serves to educate the Black community about the possibilities and to provide a hand-up into homeownership where needed. But we’re going to need support from funders in all sectors to make a sizable difference.

Care to join us? Make a commitment to public policy, using your vote on November 8 to help make the cost of home affordable for all. Call on your State Representatives to support the proposed $50M allocation for homeownership in the Washington State Housing Trust Fund. Donate your money or your time to either or both of our organizations. Listen to Black leaders who have been banging the drum for decades and amplify their needs and voices.

Afterall, if we don’t commit ourselves to being part of the solution, the disparity gap will only continue to grow.

T’wina Nobles
T’wina (she/her/hers) is the President and CEO of the Tacoma Urban League and senator for the 28th Legislative District of Washington state. Previously, T’wina worked as an instructor for Metropolitan Development Council’s College Bound program at Stadium High School and Lincoln High School in Tacoma, as well as served as a PTA leader and a school board member. She also co-founded Ladies First, an in-school and after-school program dedicated to empowering young women and building positive self-esteem. She attended the University of Puget Sound, where she earned her undergraduate degree and a Master of Arts in Teaching.

About Tacoma/Pierce County Habitat for Humanity
A neighborhood builder since 1985, Tacoma Habitat extends the opportunity of affordable homeownership to modest income residents. As active participants in building a better future for themselves and their families, Habitat homebuyers make a minimal down payment and contribute sweat equity in building their home, then pay an affordable mortgage. Historically, 60% of Habitat homeowners in Pierce County are people of color. The organization also offers free HUD-approved housing counseling to all Pierce County residents, and low-cost home repair to senior citizens and disabled Veterans. To learn more, visit tpc-habitat.org.