May 14, 2017 By Tacoma/Pierce County Habitat for Humanity in Habitat Homeowners 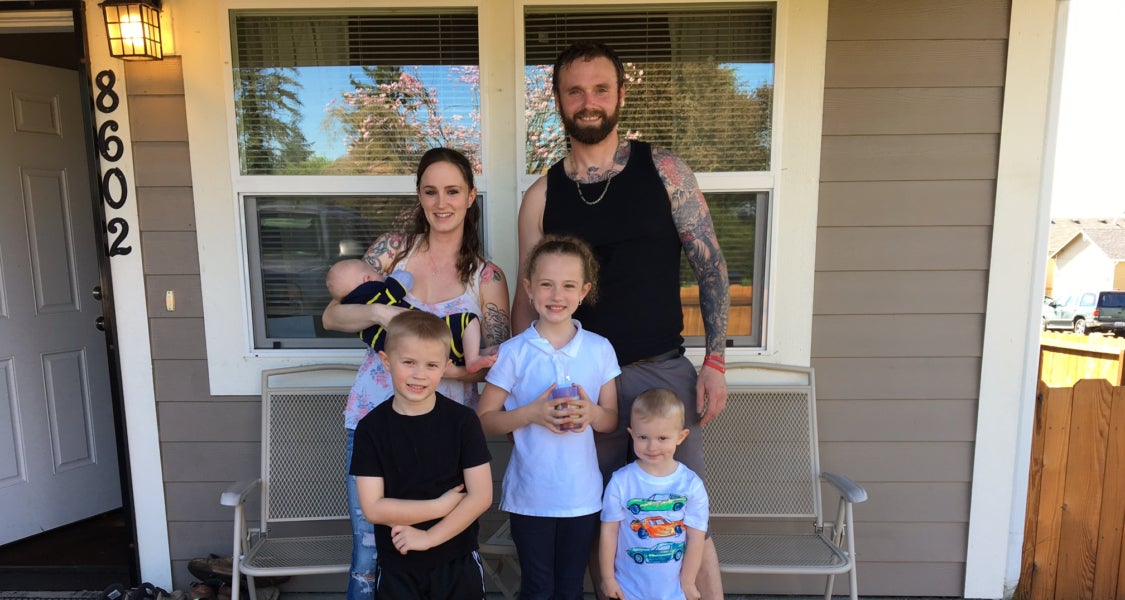 Elaine was a single mom with two young children when she moved into her Habitat home in 2012. Five years, two more children, and one fiancé later, Elaine’s modest 3-bedroom, 1,100 square-foot house is bursting at the seams. Nonetheless, she is reluctant to move. Elaine says the best thing about her neighborhood is the bonds her kids have formed with the other children.

“I didn’t grow up with a bunch of neighborhood kids,” she says. “I didn’t realize it could be like the movie The Sandlot.”

Elaine pursued homeownership with Habitat when she was only 25 years old. At the time, she was living with her boyfriend and paying $1,000 a month in rent. “When we split up, I was the only one on the lease, so I was stuck with it all. The utilities alone were an additional $500/month.”

Then her mom told her about Habitat for Humanity. “I wasn’t very interested because I didn’t know what it was,” says Elaine, but once she understood that Habitat was a path to owning her own home, Elaine says she jumped on the opportunity. “Honestly, it’s the best decision I ever made.”

Elaine says she was fortunate that she had always been financially responsible and had good credit. She was intimidated at first attending homeownership meetings because everyone was older. “I was the young girl with tattoos,” she says. “But I was able to afford it on my own.”

One of the first things Elaine did upon moving into her Habitat home was let her kids pick out colors for their rooms. She planted flowers and laid bark. She was excited to decorate.

Her oldest, Mckayla, likes the radiant heat floors. “And that we have the park and there are a bunch of kids to play with.”

These are things she couldn’t imagine doing when she was caught in a cycle of renting. “We moved every year when Mckayla was young,” she says. “We moved every time the lease was up because the landlords raised the rent.”

The stability of owning a home is not something Elaine takes lightly. She knows her family is outgrowing her small house, but the she’s reluctant to leave the bonds her children have developed. “I want my kids to grow up in one place,” she says. “Here there are always 15 to 20 kids outside riding bikes, jumping rope, playing on the playground. They all go to school together.”

Elaine says there weren’t a lot of surprises to her with homeownership. “I expected to have to fix things that broke – minor things, like floor tiles.”

The one surprise to Elaine is the one that pulls at her heart the most; the one that makes her reluctant to leave a house her family is outgrowing.

“What I didn’t expect was how close all of the kids would be. I’ve had so many kids in this house. I’m always getting text messages asking, is my kid down there?” she smiles. “I’m THAT mom.”

For more information on how you can help affordable housing become a reality, click here.