May 15, 2020 By Tacoma/Pierce County Habitat for Humanity in Habitat Homeowners 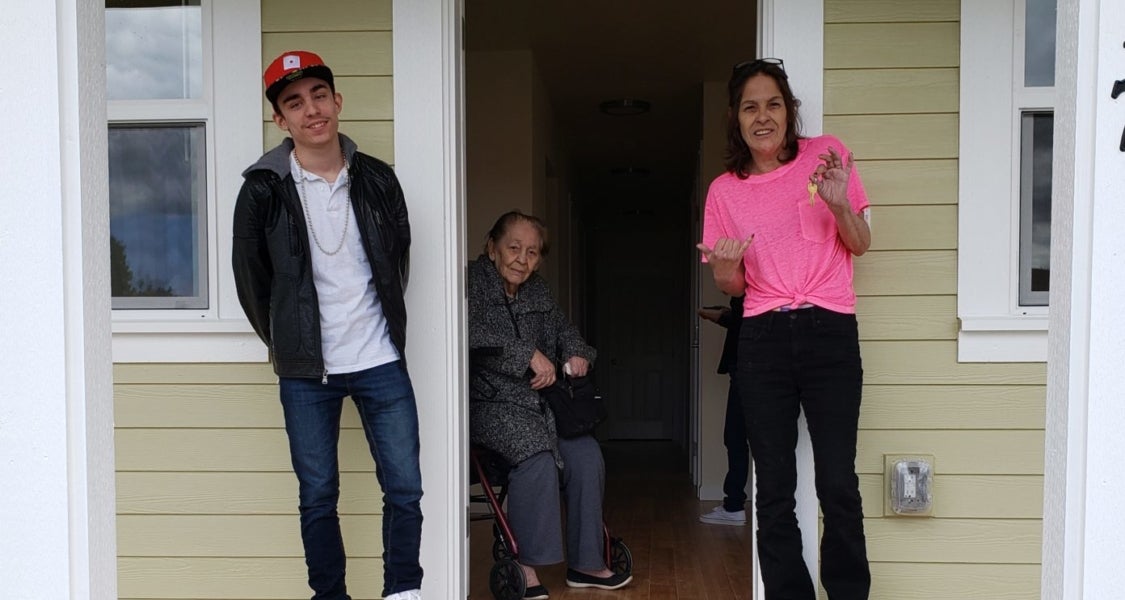 For more than two years Angela, her elderly mother, and her 16-year-old nephew Tino, of whom Angela is guardian, have shared a single small bedroom. Angela and her nephew have bunk beds; her mom’s bed is across the room.

Priced out of their apartment in 2018, Angela said, “Rent just kept getting higher and higher.”

As a last resort, the three of them moved into the extra bedroom in a relative’s home.

Angela applied to Habitat for Humanity’s homeownership program in 2018 and began putting in her sweat equity – hours of volunteer service required of all Habitat homeowners to build their homes and the homes of their neighbors. Angela committed 290 hours of sweat equity while also holding down a full-time job.

Reflecting on that time, Angela said “I lived out of my car. I had no days off. I was burnt out and exhausted.”

In August of 2019, Angela was matched with a house in a new Habitat for Humanity neighborhood. She brought her mom and Tino to the site and showed them where their house would be. Tino picked out which bedroom would be his; her mom looked forward to having a front porch.

When the COVID-19 pandemic hit in March, Angela thought the dream she worked so hard to achieve had all but died. With so much of her future uncertain, she worried her house would not be finished, or that she would be disqualified from the program.

“I told Tino that whatever happens, we’ll make it through this.” Angela said.

As a provider of low-income housing, Tacoma/Pierce County Habitat for Humanity was deemed “essential” during Governor Inslee’s Stay Home, Stay Healthy Order. However, since suspending volunteer activity on March 18, the four Construction Site Managers were left to compensate for the estimated loss of 1,561 hours of volunteer labor (March, April).

“COVID-19 may have slowed down progress and changed the way we do business, and there were a couple of detours along the way. But it did not stop Habitat or our partners from providing a stable, safe, and affordable home for Angela’s family,” said Deena Giesen, Habitat’s Director of Homeowner Services.

Angela’s home is the first to be completed by Habitat since the Stay Home, Stay Healthy Order took effect.

The final loan paperwork was signed on May 11, making Angela a homeowner.

As the keys to her new home were handed off, Angela gestured toward her mother and nephew and said, “This is all for them. I did all of this so they could have a home.”

Maureen Fife, CEO, said, “The pandemic has challenged us to the very core of our operation, but I could not be more proud of the way the Habitat team has pulled together. Angela has waited a long time and has worked so hard to get here. It was a stretch to complete this home during these challenging times. But we needed to do it. For Angela, for ourselves, and for the greater Habitat community. We all need a win right now. And here it is: Angela and her family are home.”