November 10, 2014 By Tacoma/Pierce County Habitat for Humanity in Building on Faith 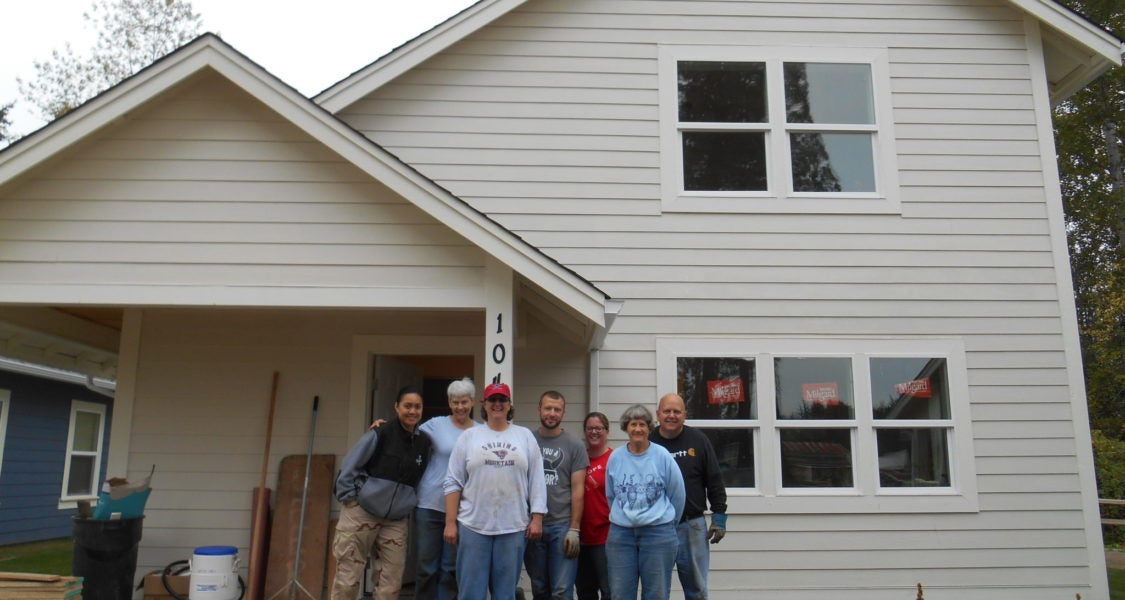 theology of the hammer

“The Theology of the Hammer” is a term used by Habitat for Humanity founder Millard Fuller to explain the idea that we cannot just talk about our faith. We must put faith and love into action… by building homes, nail by nail; by finding common ground in using a hammer to manifest God’s love; and by bringing together a wide diversity of people, churches, and other organizations to build houses and establish communities.

house #30 for building on faith

From July 9 through October 31, twelve faith groups from across Pierce County devoted their time to help build a home at The Woods at Golden Given. The most recent dedication marks the 30th Building on Faith home.

“At the house blessings, you’re watching the fellow homeowners impact each other,” Rev. Klosterman said. “It’s amazing to see these connections built. These ripple effects are going to just keep carrying on and on beyond what we could see.”

Rev. Klosterman herself had been out to volunteer when Foothills UMC participated in Building on Faith in September. Volunteering with Habitat reminded her of Jeremiah 29: 5, 7:

“Build houses and settle down; plant gardens and eat what they produce… see the peace and prosperity of the city to which I have carried you into exile. Pray to the LORD for it, because if it prospers, you too will prosper.”

Jen Livingood, a member of Foothills UMC who had volunteered with Habitat while in the military, spearheaded her church’s engagement with Building on Faith. She was new to the congregation and got to know many of her fellow members by talking about the upcoming build.

“I’ve been pretty blessed in my life and see this as a great opportunity to do that for somebody else, to give them that opportunity,” Livingood said.

Nic Sylvain from NeighborhoodChurch said that building with Habitat allowed his congregation to support their mission to embody outward love by devoting a day to actively participate in their community. His day on site reminded him of 1 John 3:18:

“Dear children, let’s not merely say that we love each other;
let us show the truth by our actions.”

During Neighborhood Church’s build day, Sylvain got the opportunity to know one of the future homeowners. “To hear him say that what we were doing was giving him hope had such a greater impact than what we originally anticipated,” Sylvain said. “It put purpose behind the work that we were doing.”

Thanks to the 2014 Building on Faith sponsors and partners:

To get involved in Building on Faith and/or Wall of Hope, please contact us.